Explanation of the User Interface

As you already know, the Monitor Client software of the Robot Monitoring Suite provides you with a User Interface (UI) as a substitute for the Teach Pendants connected to the robot controllers. Based on the information it gets from the Server on the robot, the Client chooses the Control Interface to display (different for each robot manufacturer). This section aims to explain the Client UI via pictures so that you can go ahead and start to use our software with ease.

First of all, please read the FAQ!

When you first launch the Client, you will be presented with a splash screen that waits for the initial setup to complete before launching the main window of the Monitor Client. Initially, the main window has a general UI common to all robots. The image below shows the Client UI, which is explained in some detail below. 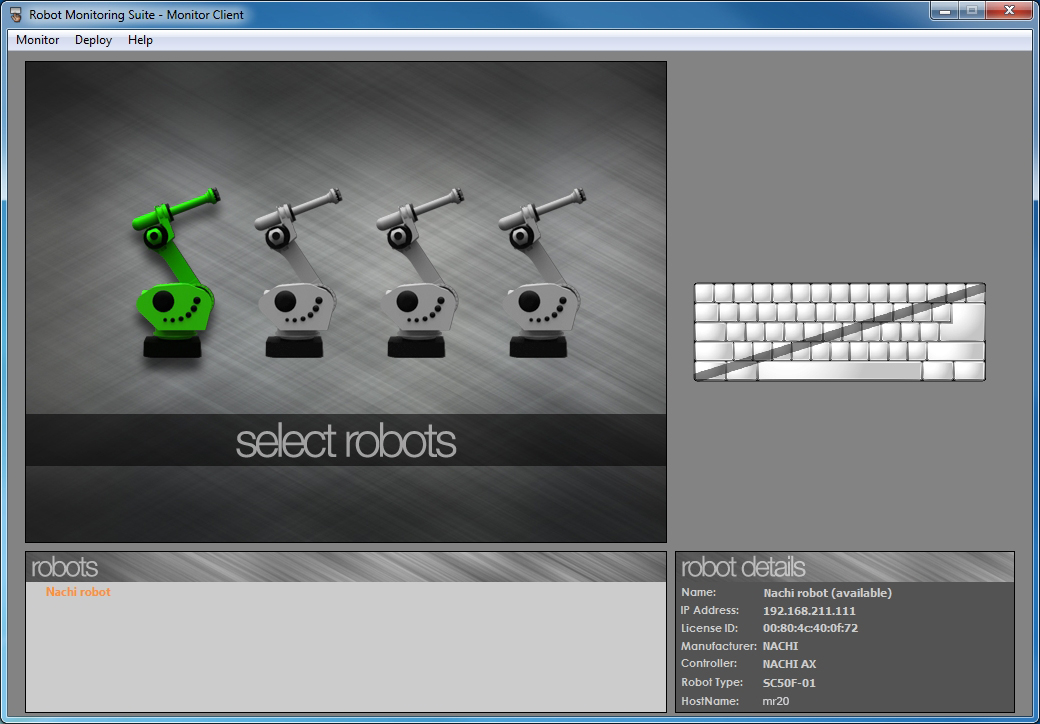 Components of the PC side Robot Monitoring Suite Client:

Double-click on the robot you want to control, and that's it!

The robot list widget gets populated over time with the robots that are detected on the network. The widget shows the robot’s name as the item text in the list, and its description as the tool tip (you can see this when you hover the mouse over an item).

Making a robot the “Active Robot” by double-clicking starts the data communication between the PC side client and the robot controller, and the UI gets updated with the Control Interface buttons, and the Teach Panel remote view.

There are four types of robot states:

The small frame at the bottom-right of the UI is the Robot Details Panel. It displays the relevant information of the robot on which the user clicked. The panel has fields for: 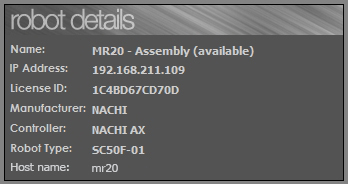 To activate a robot, double click on it with your mouse in the Robot List Panel ("Robots"), and the remote image will appear.

At startup, the panel contains a default image that informs you that the Client is listening for any available robots on the network. Once any robot(s) is found, the image changes and suggests you to connect to a robot from the list by double clicking.

The image display panel keeps getting updated with the current state of the Teach Pendant so you can always know what’s going on.
The panel also updates itself if the robot is in hold state, or is unresponsive for some time. 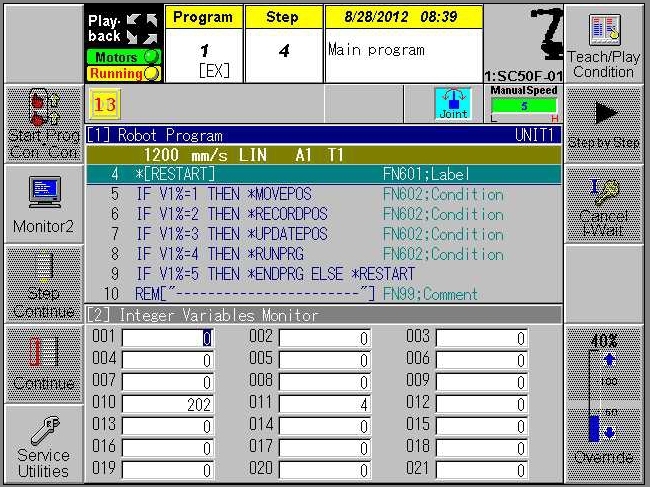 Image Display Panel during operation with a Nachi AX Controller

The Control Interface on the right side of the UI is where all the buttons from the Teach Pendant are shown.

Right clicking on the active robot's item in the Robot List Widget pops up a menu with extra options that you can use to perform a number of functions. However, keep in mind that because these options can only be used with an active robot, you need to activate a robot beforehand by double clicking on it.

The different options on the context menu are:

Edit Properties
Clicking on this option pops up a dialog box where you can edit the robot’s name and description. The RMS automatically sends this information over to the robot controller to make the necessary changes in the robot as well.
Disable/Hold or Enable/Resume
Depending on the current hold state of the robot, this option will either be Disable/Hold or Enable/Resume. “Holding” or “disabling” a robot essentially means that you’re cutting all data communication between the robot and your PC, but you remain connected so that you can “enable” or “resume” it again and continue with the data communication and normal usage.
License
You can upload a license file (.lic) to the server by clicking on this option.
Disconnect
Clicking on this option disconnects the active robot.

If you navigate on a Text Editor or ASCII File Editor on your Teach Pendant, you can directly input text using your PC keyboard instead of the arrow keys or touch screen of the Teach Pendant. This saves considerable time when writing robot and PLC programs. 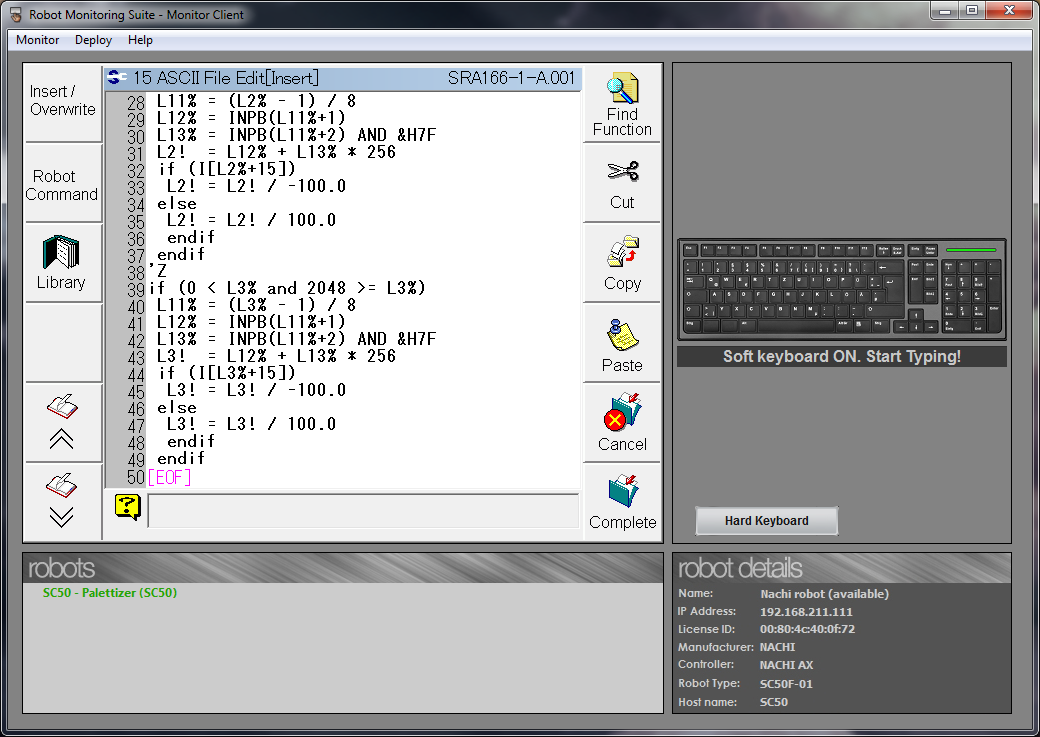 This section will try to present you with a standard usage scenario for the Robot Monitoring Suite and try and guide you through all of its features so that you are able to use them effortlessly.

At the beginning, you will have to wait until the robot list gets populated with at least one robot that’s on your network. Once that is done, you can go ahead and connect to that robot by double-clicking on its name in the list. Now you might see a very low-quality image of the Teach Pendant in the image display panel. This is because you’re running a demo version of the software and haven’t licensed it yet. You can right click on the robot name to License that particular robot server. After licensing, you get the best quality image and can freely use the Teach Pendant.

Also, immediately after connection you will see that the Control Interface updates itself with a button layout depending on the manufacturer of the robot you’re connected to.

You can use your mouse to click on different parts of the image and use it as you would on a touchscreen touch panel, the only difference being that you’re using a mouse instead of your fingers. With the mouse you can also press the buttons on the control interface and use them in exactly the same way as you do on the Teach Pendant.

You can also use the keyboard as an input device for the Teach Pendant with this Robot Monitoring Suite software, but you need to know the keys that correspond to the buttons on the UI or Teach Pendant. For this we’ve provided a map of the keys for you. You can look at it in the “Notes and Extra Info” section.

If you want to switch to another robot on the network, just double-click on that robot’s name like you did with the first one and you’ll automatically switch over to that robot.

At any point of time, if you wish to change some of the robot’s information, you can use the right click context menu on the robot list widget. Keep in mind that you’re only allowed to change the active robot’s name (Rename) and description (Edit Description) fields.

Another feature of the RMS is the ability to put a robot on hold. If you want to focus on some other window on your computer you can use the Disable/Hold option to put the robot on hold, go and do any other work you wish to, and come back to Enable/Resume the robot and continue working with that.

That’s it as far as a standard usage scenario goes.

The following are some things to keep in mind while using the Robot Monitoring Suite: